Yogoda Satsanga Society of India (YSS) was founded by Sri Sri Paramahansa Yogananda in 1917. The mission of YSS is to make available to all the ancient scientific teachings, and meditation techniques of Kriya Yoga for achieving all-round success, well-being, and a direct personal experience of God. YSS has more than 200 centers across India to help all Truth-seekers to experience the power of group meditations and to share in spiritual fellowship. In the early eighties, there were a handful of Yogoda devotees in the city of Chandigarh. A small Dhyana Mandali was formed by this small group of devotees. Group meditations commenced at the residence of Sri and Smt. Wadhwa on sundays, and it continued there for some time.

With the blessings of God and the Great Gurus, a 4 Kanal plot was allotted to the Yogoda Satsanga Society of India (YSS) by the local authorities on a lease-hold basis for 99 years.  The foundation stone was laid on January 31, 1985. Sacred soil collected from Ranchi, and other Ashrams of YSS, was sprinkled on the site. With generous financial support from noble benefactors, the construction began with great enthusiasm, and continued at a steady pace. By the steady and untiring efforts of the devotees, the construction of the first YSS Dhyana Mandir in North India at Chandigarh was thus completed.

The Mandir was inaugurated on December 9, 1985, by Swami Anandamoy Giri on behalf of Sri Sri Daya Mata, Sanghamata and second President of Yogoda Satsanga Society of India. Initially, the Dhyana Mandir appeared to be too large for the small number of devotees, but today it is packed to capacity on Sundays and other important occasions. Over the years, regular meditations and other YSS activities have been organized at Kendra. The Kendra also served as a focal point for devotees of nearby places like Panchkula, Mohali, Ambala, Patiala, Ludhiana, Jalandhar, Amritsar, Pathankot, Solan, Shimla and Jammu.

The Janamotsav celebrations of Guruji have been organized thrice at the Chandigarh Kendra – in the years 2004, 2008 and 2016. Numerous retreats have also been organized over the years at the Mandir. Satsangas, practice of meditation techniques and Energisation Exercises, and devotional chanting are an integral part of the retreats. Kriya Yoga Diksha ceremonies have also been held many times at Kendra. YSS Sannyasis often visit the Kendra to inspire the devotees, and guide them in applying Paramahsansaji’s teachings in their lives. Silver Jubilee of Kendra was celebrated in year 2010.

The concept of Family Satsanga was initiated by Chandigarh devotees. Such satsangas are held at the houses of devotees by rotation. Such a satsanga includes group meditation, reading and chanting followed by ‘Guru Langar’.

The Library and Book stall of the Kendra serves the needs of the devotees of Chandigarh, Panchkula, Mohali, and also the nearby cities and towns. 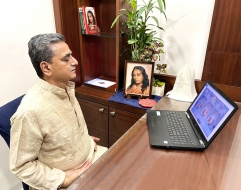 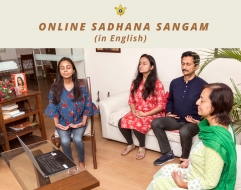 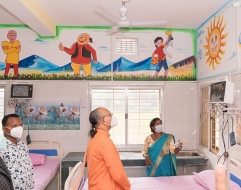 Hon’ble Chief Minister of Jharkhand Inaugurates a PHDU Set Up by Yogoda Satsanga Society of India... 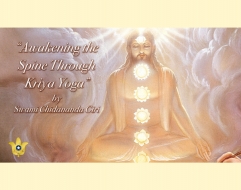 “Awakening the Spine Through Kriya Yoga” by Swami Chidananda Giri

“Awakening the Spine Through Kriya Yoga” by Swami Chidananda Giri...